White chocolate is an abomination

October 31, 2017
There are some things in this world that just shouldn't be. White chocolate happens to be one of those things. The fact that it's misnamed is enough to make my blood boil. There are so many things wrong with white chocolate that calling it anything short of an abomination is giving it more love than that, over the top sweet-plastic tasting- ruiner of perfectly good candy products, deserves. If you've ever eaten some, you know what I'm talking about. 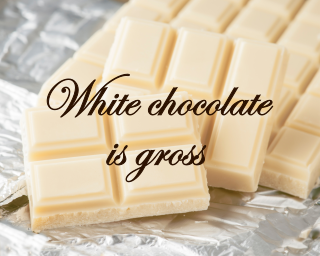 So what's wrong with white chocolate? Let me count the ways.

Let's get to this straight right away. Don't even start with the "it's in the name" bullshit, I've already established that stuff has been misnamed since the beginning of time (see my cheesepie article for more argument on that). White chocolate isn't even chocolate, it's made up of cocoa butter, milk solids and fats, and a metric shit ton of sweetener. There are no cocoa solids in it whatsoever. No cocoa solids means it's not actually chocolate. It's actually closer to the lotion people rub all over their dry skin than it is to an edible food product. You want to eat sweetened lotion in bar form? Be my guest, you animal.


White chocolate is terrible for you

As you may have read in my piece about fast and fast casual food, I don't think you have to eat healthy all of the time. Sometimes you deserve a treat for your general well-being. However, consuming this monstrosity is down right not a great idea. Since cocoa butter, on its own, is too revolting to even consider eating, candy producers are forced to add copious amounts of sugar. Most white chocolate is at least 60 percent sugar or some combination of sweeteners. That much sugar isn't good for your teeth, arteries, or any other part of your body. Studies have shown that chocolate that contains more than 60% cocoa solids may reduce the risk of a heart attack and can protect the rest of your cardiovascular system. So because white chocolate doesn't have cocoa solids, it's not going to give you any benefits. That is, unless of course you consider rotting your teeth, hardening your arteries, and eating empty calories, to be benefits.


Like the mouth-feel of plastic? Have some white chocolate

You would think that a food made almost entirely of sugar and fat couldn't possibly be bad. Somehow white chocolate is able to taste horrible on a consistent basis. Many describe the taste and texture of this over processed, food-like item to that of plastic. It doesn't taste exactly like licking the outside of a milk container or swishing around a mouth full of Legos, but it isn't far off. There is something that's just not right with the taste, no matter how many other flavors or bits you work into it. Oh and before you say "Well Dan, maybe you just haven't had good white chocolate.", let me stop your right there, Haas. You're right, but that's only because there is no such thing as "good" white chocolate. There are only two categories of white chocolate: barely edible that you would only eat if you were going to starve to death and the straight into the garbage bin type which encompasses roughly 99% of it that is produced.


Chocolate is supposed to be brown (or pink). Not green, blue, purple, yellow, etc.

Both milk and dark chocolate have a luscious and beautiful brown color to them. It's inviting and warm. It makes you want take a small bite and let it melt on your tongue. White chocolate doesn't have those features. Instead can be dyed with all sorts of artificial colors to become whatever color you want it to be. I only want pink chocolate if it is, in fact, pink chocolate. I do not want a sugar bomb mixed with some red food coloring.

A lot of my favorite candy brands have succumb to the white chocolate craze. Have a good chocolate product? Why not save a few pennies and ruin it by replacing the tasty part with a gross white substance? It's seriously everywhere and it makes me sad to see such good candy dragged through the white mud that is white chocolate. You can find Reese's, Kit Kat, M&M's and may more ruining there great products by offering them with white chocolate. Now I'm not a problem of crossover flavors because the cranberry people have been doing it for years and they've done a great job overall. But that's because the tartness of a cranberry brings something interesting to the palate, where as the insane sweetness of white chocolate makes you feel like you have brand new cavities the second you bite into it.


When it comes down to it, I'm right

White "chocolate" is disgusting for many more reasons, but the ones I've outlined here should be enough to show how bad it really is. Nobody actually wants to eat this fake chocolate that masquerades around with a false name. It should be ashamed of itself and if you actually do like it, you should be ashamed too.
Candy Food