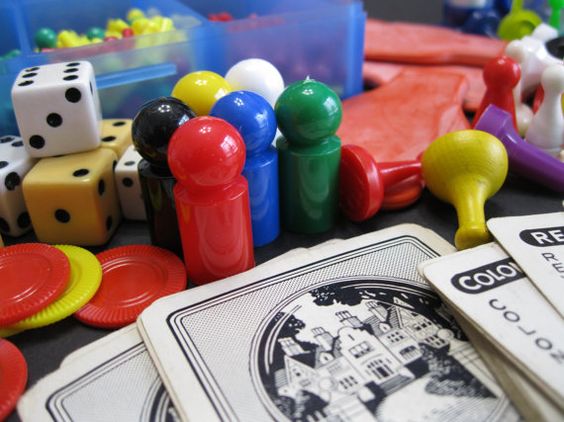 After agreeing to do a co-design with my friend Shawn, I'm back to working on game designs again. Stepping away from designing for a while was a smart idea because now I have come back with fresh eyes and new ideas. As of right now I have four active designs, including the newest game Dice Rx which I'm co-designing. Here's an update on each of them: 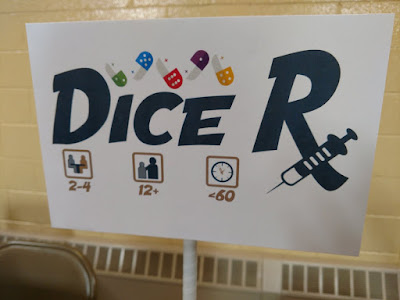 "In Dice Rx, players compete to achieve the best customer service score. Players will have to accurately fill prescriptions and vaccinate as many customers as possible. A dice draft starts the game in order for players to stock their pharmacies. There are five different colored dice that represent the medications found in the game. From there, players will use their pharmacist and technician, alongside some upgrades, to perform various actions on their personal pharmacy player boards. The game utilizes worker placement, action point allowance, and resource management mechanics to guide players in running the best pharmacy that they can. The player with the best Performance Review score wins the game!"

I'm really excited to be a part of this design because it's definitely my most involved game yet. Pretty much everything I've done in the past has been card games that had few or no extra components. This one has multiple boards, cards, dice, tokens, tiles, cubes & pawns. We've only been working on it for less than a month but have a full rules set, prototype, and a handful of playtests done, most of which came at VersusCon this past Saturday. The people who played it were surprised as to how well it worked for being such a new design and Shawn's great looking prototype certainly helps players grasp it quickly. 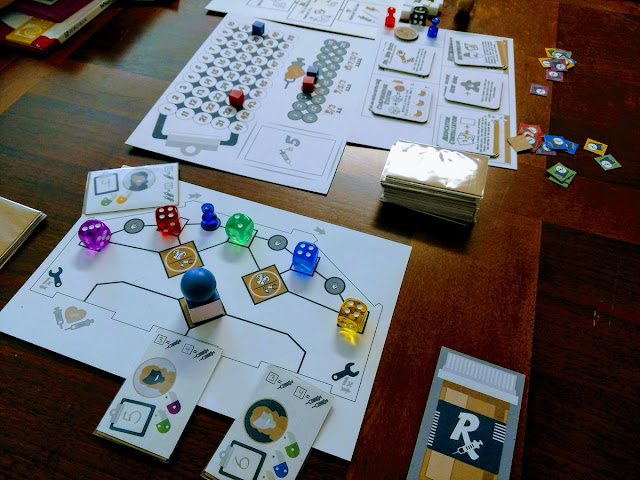 We're constantly tinkering with the rules and looking for ways to make it better. Starting off by brainstorming a full rules set and trying to see if it'd work in our heads before building the prototype paid off. Of all of the designs I've done, this one already gives me the most confidence that somebody will pick it up for publication. 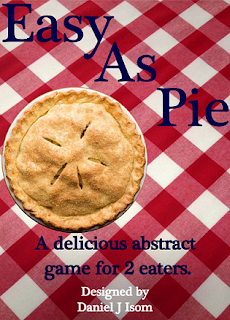 I'm still trying to figure out what to do with this. I've pitched it to quite a few publishers and even had some play the physical prototype or PnP files, but no bites so far. The frustrating part about the whole thing is nobody has given me feedback that could make the game better mechanics wise. They see it as smart idea and a cute them but their ultimate decision is a no because its small footprint is either too small for most or slightly too big for those doing micro games. The fact that it's an abstract doesn't help things either.

So here I sit pondering what to do with it, as it seems I'm out of options at this time for a publishing partner. I could try and publish it myself or make it a print and play but for some reason I can't seem to give up on the idea that this design deserves to see a true print run. I really do think that it's that good, it doesn't help that well known designers have said the same. So if you know anybody interested in a game that only uses 17 cards and 8 tokens, please have them send me an email or something.

Tricks for Treats
I've been working on this one for a few years now and it just got some new life over the past week. I love trick taking games but I've been searching for a way for it to separate itself from the crowd. There have been a bunch of great trick taking games coming out since I first designed this one, so now the bar has been set even higher. Trick taking at its core is simple and most follow the same formula; everyone plays a card from their hand, highest led card wins. If there is a trump suit then the highest led trump suit card wins. What's needed to make the game unique is a scoring system and that's what has plagued this design. I have not come up with one that feels new, exciting, and most importantly, fun.

The player counts, number of suits, decision whether or not to include a trump suit and scoring systems have all changed with each iteration. I *think* I may be on to something with this new one. It plays 3 to 5 players, uses three suits, and includes a trump suit that each player gets to choose once. After the same number of rounds as there are players, the player with the highest score wins. Sounds like a somewhat standard trick taking game but what turns the game in its head is the scoring system. It borrows from the original idea of having a deck of treats that came out one at a time and then players played the hand and the winner took that treat. The treats had different values so you never knew what you were going to get. I never thought straight scoring that way was interesting enough so I kept coming up with convoluted scoring ideas that never really made sense.

So now a different "house" card comes out each hand showing a bowl of treats, the variety of which depends on the player count. When a player wins the trick, they get first choice as to what treat they want. The remaining treats go to the other players in a specific order. There is a score tracking board where players add up the treats they have collected. So unlike the standard trick taking scoring, everyone is going to get something, just like when you and your friend go trick or treating. However, there is also a balancing act to the game. If you eat too many of any one treat, you get sick and lose all of those points and have to start back at zero. One way to stop yourself from going over the tipping point is to take apples from the bowl, when available, but each on will cost you a point. As with the candy, there is a tipping point but if you eat enough of them, you can go back to losing no points.

I've yet to play this idea out yet but I'm really excited to see if it works or not. If it does work, then it's full steam ahead into playtesting and pitching to publishers. If it doesn't, it'll be back to the drawing board.

Herd the Flock
This is another older design that I haven't let go because I see its potential. It's a 60 card card fishing, hand management, & set collection for two to four players. the idea is that players are trying to become the best shepherds by herding the most valuable sheep. Some cooperation is needed to keep the sheep alive because there are hungry wolves that are lurk on the edges of the pasture, looking for an easy meal.

I originally wanted it to be a gamer type game but after running through it a few times, it seemed that this could be a great kids game. It teaches basic math skills, matching, and offers some interesting choices to be made. I haven't played around with this one since the beginning of the year so I'll dust this off and see if I can't get it to the table again soon.