What podcasts do you listen to? 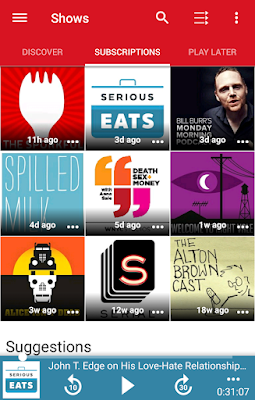 I've been listening to podcasts for a couple of years now and doing so is one of the best decisions I've ever made. It all started back when I started my weight loss journey a couple of years ago. I needed something to listen to on my lunch break walk but didn't want to use the data on my phone to stream music. I could have easily just used my iPod or downloaded music to my phone but I've always been a fan of talk radio so I wanted something more along those lines. I threw out a question to Twitter and got a few responses, the one that caught my attention the most was for Welcome to Night Vale, after two followers had a little back and forth of references to the story. I downloaded the pilot at home while on WiFi and the next day I was hooked before the first mile had ended.

Now I primarily listen to podcasts in the car going to and from work because I walk with a couple of other people each day. Since starting to listen to podcasts, I've regularly listened to roughly a dozen or so but a few dropped off after a while, leaving me with a core of 9 or so that's I've enjoyed for most of my two years of listening. Since I'm caught up on most of my podcasts, I've recently added a couple where I'm working through the backlog to catch up. Getting into podcasts that have been around for years and starting from the beginning is great because you always have something to listen to...well until you get caught up and then it's like pre-Netflix TV where you have to wait a week or two until the next episode airs.

What I love about podcasts the most is that you can find one on virtually any topic or in any style. When listening to "talk radio", I'm a fan of food, comedy, interviews, and story telling so they make up the majority of what I listen to. Here is my current podcast list:

Death, Sex & Money - A podcast hosted by Anna Sale about the big questions and hard choices that are often left out of polite conversation.

Welcome to Night Vale - A podcast in the style of community updates for the small desert town of Night Vale, featuring local weather, news, announcements from the Sheriff's Secret Police, mysterious lights in the night sky, dark hooded figures with unknowable powers, and cultural events. Turn on your radio and hide.

Alice Isn't Dead - A truck driver searches across America for the wife she had long assumed was dead. In the course of her search, she will encounter not-quite-human serial murderers, towns literally lost in time, and a conspiracy that goes way beyond one missing woman.

Serial: Season One - It's Baltimore, 1999. Hae Min Lee, a popular high-school senior, disappears after school one day. Six weeks later detectives arrest her classmate and ex-boyfriend, Adnan Syed, for her murder. He says he's innocent - though he can't exactly remember what he was doing on that January afternoon. But someone can. A classmate at Woodlawn High School says she knows where Adnan was. The trouble is, she’s nowhere to be found.

Bill Burr's Monday Morning Podcast - A twice a week comedy podcast where Bill Burr speaks without reservation and off-the-cuff about his past and recent experiences, current events, going on tour, sports, and offers advice to questions submitted by listeners.

Spilled Milk - Every week on Spilled Milk, writers/comedians Molly Wizenberg and Matthew Amster-Burton start with a food-related topic, from apples to winter squash, and run with it as far as they can go—and, regrettably, sometimes further.

The Sporkful - The Sporkful isn't for foodies, it's for eaters. Each week on our podcast we obsess about food to learn more about people.

The Alton BrownCast - In this podcast, Brown reviews recent food news, takes calls and questions from listeners, and interviews celebrities and other guests.

Honorable mention for a 7 episode podcast that was one of the best listening experiences of my life:

S-Town - John despises his Alabama town and decides to do somehing about it. He asks a reporter to investigate the son of a wealthy family who’s allegedly been bragging that he got away with murder. But then someone else ends up dead, sparking a nasty feud, a hunt for hidden treasure, and an unearthing of the mysteries of one man’s life.

So what are you listening to?