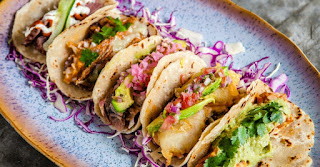 For the past few years, I have been participating in two Mexican food themed challenges on BGG. Each year in November there is BurrEato, where people try and eat 30 burritos in 30 days. That one is quite a feat to pull off. But in May there is another challenge dubbed Taco de Mayo, where people try to eat 31 tacos in 31 days. This one is not so hard to pull off but it is equally as fun. This year, like last year, I was asked to host it after I volunteered to step in for the person who normally runs it. Since this is one of my interests for the month, I thought I would talk a bit more about it and invite you to join us.

It all started when a serious post about National Novel Writing Month got way out of hand and turned into talk about eating a burrito a day for a month. That was back in 2011. Then in 2013 Taco de Mayo was started as a compliment to the beloved burrito challenge, and by compliment I mean an excuse to eat food in a tortilla. Ever since, the people who frequent the Chit Chat forum on BGG have looked forward to these two celebrations of Mexican food eating. Each year they have grown and each year more and more prizes are donated towards the gluttonous fun.

So do you have to eat a Taco a day to complete the challenge? No, you just need to eat 31 tacos before the end of the month. Some people choose to try and eat at least one a day and many succeed. Others push the limits to eat the most tacos out of all of the competitors. Last year's champion ate 306 taco...I'll let that settle in for a minute...306 tacos. Crazy. Not only did she eat 306, but because of dietary restrictions, she had to make every single tortilla. I don't think that record will get touched this year but who knows. I for one try to at least double up the goal and have been successful in the two years I've done it, eating 62 in 2015 and 65 in 2016. This year I'd like to get to 66 at the very least. Now you'd think eating so many tacos would be terrible for your diet but if you're smart about it, you can still succeed. Since we allow for things like lettuce cups to count, you can even eat healthier than you do already.

I make tacos roughly once a week throughout the year. So during May, I just make more fillings each time, that way I have leftovers for lunches during the week. This way, I don't make Christine eat tacos every night for dinner but I still can reach my goal. Another way I get my numbers in is by just turning whatever leftovers we have for dinner into tacos the next day for lunch. Have you ever had a spaghetti and meat sauce taco? What about cheeseburger and tater tot taco? Surely a philly cheesesteak taco? Oh what about my favorite, fried rice and General Tso's chicken taco? Then there is always the classic breakfast taco which is very quick to whip up in the morning. Precook some bacon or sausage the night before and all you have to do it scramble and egg or two and you're good to go. Now dessert tacos have been creeping in over the past couple of years, as people look for ways to eat as many as possible. Peanut butter, Nutella, and banana in a cinnamon sugar fried tortilla is a personal favorite.

No matter how you do it, it's just a fun experience. If tacos are already a part of your diet, please consider joining us. It starts today but even if you're reading this three weeks from now, feel free to join and help us try to break last year's totals.